In addition to iTunes, MOTION SICKNESS is now available for download and streaming on Amazon. Coming soon to Google play.

We are thrilled to announce that as of March 24th, 2015 you will be able to see Motion Sickness on iTunes for purchase or rental. Pre-sales available as of March 17th.

The second sceening of Motion Sickness in NY will take place in Yonkers. Tickets available through out Tugg evets page. Q&A to follow.

We are thrilled to announce that the NYC theatrical premiere of Motion Sickness will take place on Tuesday, August 26th at 8:30pm at AMC Loews 19th Street. Tickets can be purchased through Tugg at this link: http://www.tugg.com/events/10493. All tickets mist be purchased in advance on the Tugg site.

This screening will only happen if enough tickets are sold by August 19th, so please buy early and tell your friends about this unique movie going experience.

Motion Sickness has received two award nominations from the Indie Horror Fest in Chicago,IL. The first was for best feature, and the second for best sound. Congratulations to cast and crew!

Motion Sickness has been selected by the 2013 Frequency Film Festival in San Diego, CA. It will screen on April 1st at 8:15 PM. Festival information is available here: http://www.frequencyfilmfestival.com

The Tabloid Witch Awards, held annualy in Los Angeles, CA has awarded Motion Sickness with both Honorable Mention for a feature film, as well as for Best Cinematography.

Congrats to the entire cast and Crew, and to Eun-ah Lee specifically for bringing home the cinematography award.

Motion Sickness, along with the rest of the award winners, will screen at Loscon 39 that runs from Nov. 23-25. Screening times to be announced.

read more about it: http://www.hollywoodinvestigator.com/2012/horrorfilm2012.html

The Freakshow Horror Film Festival is part of the Spooky Empire Ultimate Horror Weekend that runs from Oct 26th through the 28th. It was called one of the 20 coolest festivals in the world by MovieMaker Magazine.

Washington DC's premier Horror Film Festival, the Spooky Movie International Film Festival will be screening Motino Sickness at 9:15 on october 15th. There will be a Q&A with director S.M. Kerstein following the screening. For tickets and information please visit http://www.thespookymovie.com/ 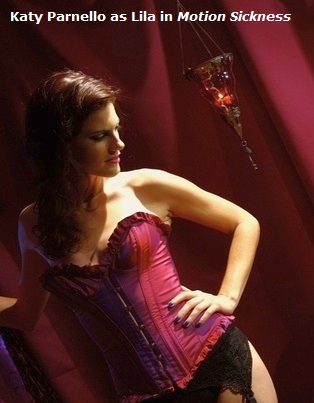 [HollywoodInvestigator.com]  It's hard to say what Motion Sickness is about or what it means. What it is ... is interesting, even mesmerizing, in a David Lynch sort of way. That, plus a touch of David Cronenberg's medical/ body phobias and Darren Aranofsky's Jewish mysticism.

The film opens with detectives investigating Shem's headless corpse. Then we see Shem (Jason Liebman) on a train to see his doctor. Health problems are perhaps why he is a former (failed?) rabbinical student. Now he just sits at home all day, reading. He also sees people (on the train, on the road, in his building) who may or may not be real. Odd people. Especially the temptress next door who calls herself Lila (and may or may not be the demoness Lilith).

Things get weirder. Motion Sickness shares the mobius strip structure of Lynch's Lost Highway and Mulholland Drive. Midway through the film, Shem's reality changes. He becomes Aver (Trevor Nelson), who behaves like a 1950s greaser. He lives where Shem lived, and knows the same people. But the details are different.

Writer/director Stephen M. Kerstein admits Lynch's influcence. "I love David Lynch's films. When I first saw Eraserhead, it probably warped my then 15-year-old brain. (Maybe I watched it on theVideodrome signal.) He opened my eyes to film's ability to do more than distract or entertain. He continues to be my greatest influence.

"I would definitely include Cronenberg and Aranofsky, though in Aranofsky's case it may be a matter of sharing similar influences. F.W. Murnau and Ingmar Bergman are also filmmakers whose work has impacted me greatly."

Motion Sickness is set in an indeterminate time. Props appear to be from the 1930s through 1950s (e.g., the rotary phone, the flashbulb cameras), yet the train is more modern. "I didn't want the time and place to be overly identifiable. I wanted to draw attention to the objects themselves, not just their utility in a particular moment. It was important that the world of the movie be more mechanical, less digitized than the one we live in currently."

Of course, David Lynch too is known for his love of the retro.

Kerstein admits that people ask what his film is about, but he doesn't like to get specific. "There is a fair amount of structural and narrative ambiguity built into the film that I wouldn't want to dismantle by saying that it's about this or not about that. I like to encourage audience participation. The film reveals certain things while it hides others. There are clues and interconnections that when noticed and followed should reveal a lot of what's going on beneath the surface.

"As a viewer, the films that excite me most are the ones that force me to do a little work instead of letting me remain passive. My experience is made much richer for it. I wouldn't want to ruin that for someone else. That being said, there are certain things that are integral to understanding the film. I hope I've made those clear."

I thought perhaps that, as in Jacob's Ladder or An Occurance at Owl Bridge Creek, Shem has been killed and the events are his final thoughts, days lived in a millisecond. Kerstein dismisses that. "No, it is not a retelling of either of those movies, wonderful though they are. Also, I don't know if I would describe the reality as mystical, but mystical concepts definitely play a role in the film."

So do traditional sexual dichotomies. Shy boy (Shem) vs. bad boy (Aver). Good girl vs. temptress.Motion Sickness abounds in sexual symbolism. An easy interpretation is that it's about a religious Jew's struggle against physical temptations. Shem struggling against his inner Aver.

Kerstein admits that's true on one level. "Dualism, and issues relating to it, are central themes of the film. But that is touchstone for broader concerns."

The music in Motion Sickness has Middle Eastern sounds similiar to that in The Last Temptation of Christ and The Passion of the Christ. "Two of the songs are by a group called Dead Can Dance," says Kerstein. "Some of their music has been in other films, including Baraka." Motion Sickness also features works by John Cage, Chopin, and the Boswell Sisters.

Motion Sickness was shot on a Panasonic HVX200 with a 35mm lens adapter, and edited on Final Cut Pro. "The budget was around $185,000," says Kerstein. "It came from a sole investor."

Completing the film was difficult. Kerstein entered a rough cut in "a major festival" in 2010. "The film was not completed, however, until October 2011. It was shot in three parts over the course of three years. That was due, in part, to my own miscalculations early in the process, and certain locations falling through at the last minute. I am forever grateful to the entire cast, and the people with whom I worked very closely, like my producer Paul Di Palma, and production manager Arturo Nunez, who stuck with the film throughout the long process."

Motion Sickness premiered at the 2012 Los Angeles Fear and Fantasy Film Festival. It was also accepted by the 2012 Vegas Indie Film Fest. You can learn more at the film's website.

Let's fill the Banshee for the premier screening of Motion Sickness! Join us in downtown Burbank for the 11:30AM show. Tickets can be purchased at http://shop.fearandfantasy.com/May-16-1130-AM-Motion-Sickness-Feature-USA-2A4.htm

Hope to see you all there.

The Los Angeles Fear and Fantasy Film Festival that runs from May 15-20 will host the world premiere of Motion Sickness, on Wednesday the 16th at 11:30 AM.  Tickets are available through their website fearandfantasy.com.

Motion Sickness is an official selection of the VEGAS INDIE FILM FEST!. Screenings for selected films will be held throughout the year. Check back for further news and screening dates.